A negative blame game #BrokenRadio Mr. Development Cronie? We cannot stop natural disasters but we can arm ourselves with wisdom, either to really help those in need / suffering or outlay investments for future vested gains of a few high-decibel cannibals. The death toll stands at hundreds in the rains that have lashed the city and other parts of state apart from huge collateral losses. All modes of transport – air, road and rail services – have been hit due to the unprecedented deluge, leaving thousands of passengers stranded at the airport and various rail terminals. Adding to the worry of the citizens and administration, the met department has forecast more rainfall under the influence of a trough of low pressure and upper air circulation over the southwest Bay of Bengal and Sri Lankan coast, the majority oceans showing land who’s boss! There are protests across the region against non-availability of essential items in the past days.

It is extremely painful to see people put in to such pathetic position due to shortsightedness and looting culture of employees at most public utility service providers in good times. It rained very heavy, not only in Chennai but also in adjacent townships Kanchhepuram / Thiruvallur. The rivers overflowed and battered the already choked City. Never did the ruling or ruled leaders cared for civic amenities, nor the masses are aware of their rights and basic entitlements from governments ruling with power of public resources. People get contented with lure of freebies, jugaad & joomlas and some quick money. The short buck cronies do not understand what exactly our needs are; basic civil amenities like roads, sewerage, storm water drains, electricity, social / nature’s cleanliness and maintaining of water bodies.

The typical “Raam Bharose” attitude promoted by babas & babes is going to be the reason of all future devastation and nature’s fury.

Use Microsoft / our pet techie dogs or go to hell – A FAST LANE for rich people’s applications! 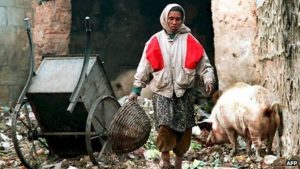